Take a Vow of Silence on April 24 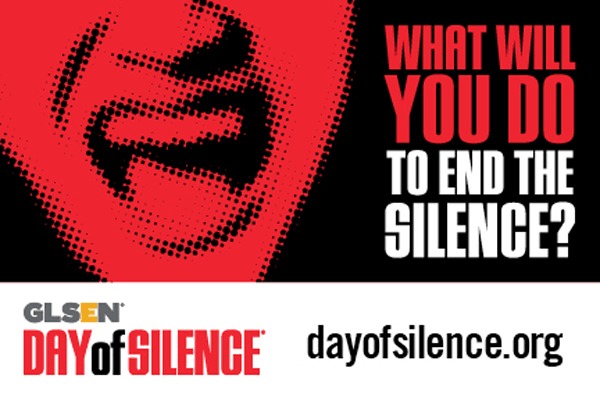 Will you take a vow of silence on April 24 and take a stand to end discrimination, bullying, and harassment of LGBTQ+ individuals in schools around the country?

The Gay, Lesbian & Straight Education Network (GLSEN)’s Day of Silence is on April 24, 2020 and the organization encourages everyone to take a one-day vow of silence to protest the harmful effects of harassment and discrimination of LGBTQ people in schools.

The National Day of Silence was created in 1996 by 18-year old University of Virginia Student Maria Pulzetti and was later endorsed by GLSEN. The Day has become an annual, youth-led day of protest, reflection, remembrance, and solidarity for LGBTQ people and straight allies.

GLSEN was founded by a group of teachers in 1990 with a mission of creating educational environments that would be safe for everyone by standing against the bullying of LGBTQ+ students. They now have 43 chapters in 30 states and work diligently to support the efforts of GSA and LGBTQ-led organizations in schools around the country.

Take a Vow of Silence on April 24

To participate in the Day of Silence, take a vow of silence on April 24 to stand with GLSEN to put a stop to bullying in schools. Before the event, take the time to make signs and placards to help explain to people on the Day of Silence why you are being silent.

Here are some other steps to make sure you’re ready to take part in the annual event.