Action Items for Allies: See Something, Say Something 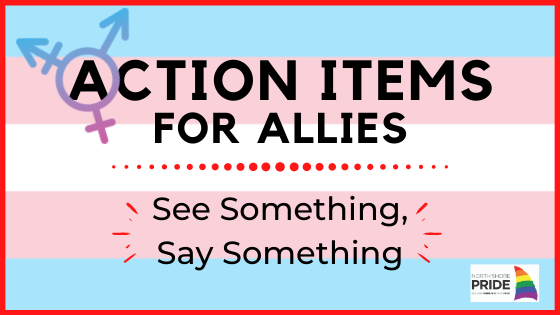 These action items include:

We will be posting a series of Blog posts in the coming weeks centered around these topics. This week we’re discussing why if you see something, you should say something. 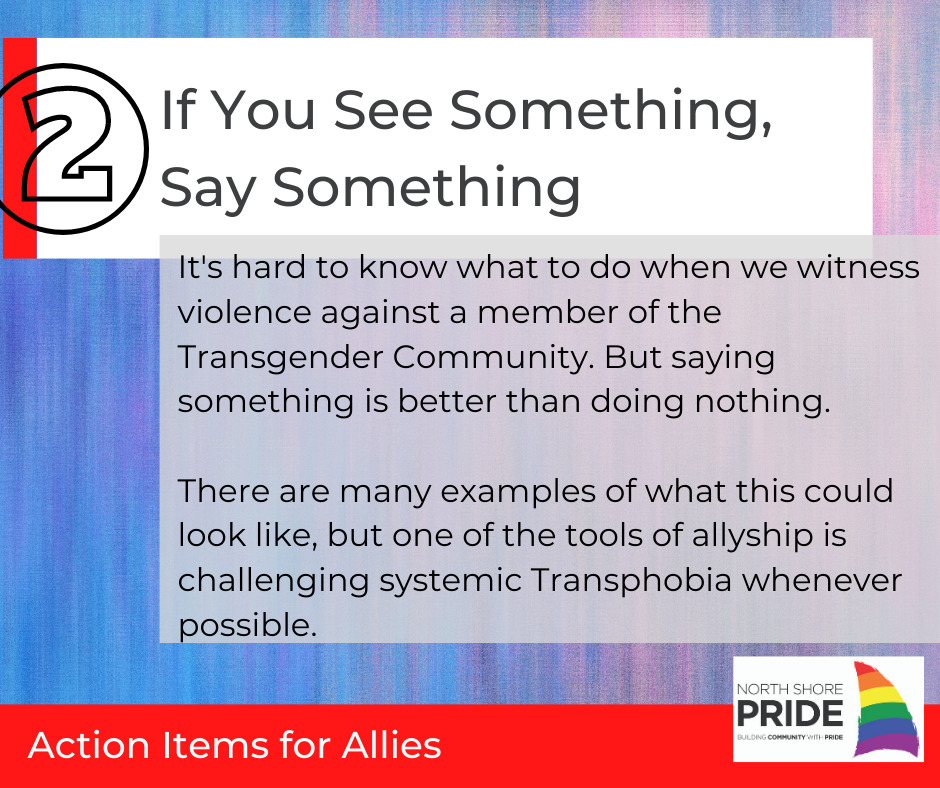 Action Items for Allies –  See Something, Say Something

“There’s no such thing as an innocent bystander. If you see something, say something. You need to do something about it,” – Alishia Ouellette, Transgender Advocate, Retired Danvers Firefighter

“The internet is this amazing thing for trans people. It’s this amazing tool to connect us because we’re able to carve out spaces where people can’t hurt us, or we can ban people if they say something transphobic,” – Syd Sennett, Transgender Advocate, Board member North Shore Pride and Peer Leader for nAGLY

It’s hard to know what to do when we witness violence against a member of the Transgender Community. But saying something is better than doing nothing. So if you see something, say something.

There are many examples of what this could look like, but one of the tools of allyship is challenging systemic Transphobia whenever possible. Whether in person or online, it’s important to speak up whenever we see someone being mistreated. Allyship means not expecting that a person being bullied or discriminated against will have to stand up for themselves on their own.

The biggest help that allies can give to Trans individuals is using their voice in difficult situations. If someone is being misgendered at work, you can gently correct the person doing the misgendering with the consent of your Trans coworker. If you’re unsure of what misgendering means, read “A Short Guide To Pronouns Part 2: Allyship, Misgendering, And Why It’s Ok To Make Mistakes”

Or, if you witness people making anti-transgender comments or jokes either generally or about a person in particular,  even saying “Hey, don’t do that, it’s not cool,” might be enough to get the people to stop doing it. People aren’t often used to having their language challenged, and if they know someone is paying attention, the best case scenario is that they also might start to understand the impact of their behavior and work to change it.

As Alishia Ouellette said, there is no such thing as an innocent bystander. As Desmond Tutu said, if you are neutral in situations of injustice, you have chosen the side of the oppressor. When you are a witness to Violence Against the Transgender community in person or online, say something, do something.

Doing so will make the world safer for your Transgender friends, coworkers, and loved ones.